Rock Around the Jukebox - Rosmalen 2010 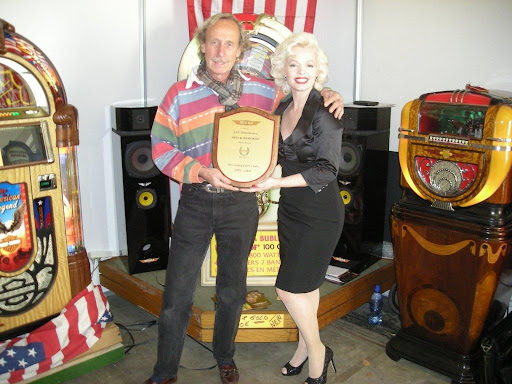 J. Claude Trauchessec of Arts and Memories, Paris - is a Champion of Rock-Ola Jukeboxes. Marilyn stopped by the booth at last weekend's Rock Around the Jukebox show in Rosmalen, Netherlands.
Posted by Rock-Ola Jukeboxes at 2:31 PM No comments: 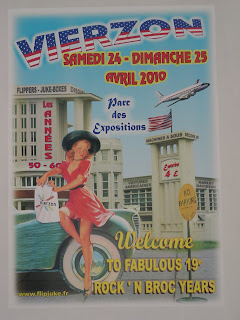 WELCOME TO THE VIERZON SHOW / APRIL 2010

Since 1992, the city of Vierzon ( center of France, 2h south of Paris) also becomes, during a spring week-end, the Center of Europe for its now very renowned & famous " Rock' N Broc Years Festival "

Historically, Vierzon was the designated city for this event. Just after WW2, Vierzon was already breathing in American rhythm, style and musical atmosphere. Between 1951- 1968, US Army bases & Air Force squadrons were numerous around Vierzon and neighbouring cities such as Chateauroux and Orléans. Since that time, the US spirit and culture were adopted by the citizens in that area of the French provinces. 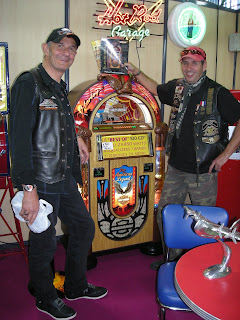 For its 19th edition, April 24-25 2010, this 50's Collector show dedicated to Pinballs, Jukeboxes, Jackpots & Slot-machines, Records and US deco was deemed a great success for organizers, exhibitors and visitors alike. Coming from Germany, Belgium, the Netherlands, Switzerland and France, more than 13.000 bikers, collectors, amateurs, baby-boomers & friends were able to admire and purchase a wide variety of games, toys, spare parts, clothes with a strong turnout for collector jukeboxes and the new line of Nostalgic Rock-Ola as the Bubblers and Harley.

Among them, Ben Franse and Norman Coster from the Netherlands, and of course, J.Cl Trauchessec (French Rock-Ola representative).

Entertainmentwise, there was Country Music with the Tennessee Rose bands, Merilly the French Loretta Lynn female singer, R N' Roll Diner- Concert, Line Dance, Jive and Boogie, and a Cruising Parade in the city of Vierzon with a parade of 350 harley-davidson, 250 Us cars, big bands and Pom-pom girls.

For the next 20th edition in 2011, Bernard Moulin ( the dynamic French organizer ) expects a full three days Hall of Fame 50's Show made in America, over 5.000 M2 for exhibitors, many thousands of visitors and of course, the whole range of the Rock-Ola Nostalgic and Music-Center jukeboxes. 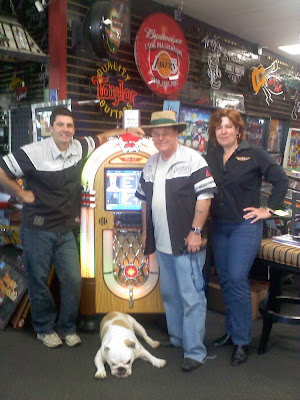 On our website we encourage people to "Call for an Authorized Rock-Ola Dealership". As a result, I'm on the phone a lot, finding out what consumers want, answering questions and usually directing them to an Authorized Rock-Ola Dealership. Turns out we have one of our best-selling dealerships almost in our own backyard -- that is, Game Room City in Santa Fe Springs, CA.
I recently got to pay Becky, Jim and Dennis a visit at the store... also met Maverick, Super Dog.
From the introduction of the Rock-Ola Music Center back in 2006-2007, Game Room City was among the first of our dealerships to embrace the new technology, learn more about it and to sell it. As a result, GRC is among our top 5 music center dealerships, worldwide.
A couple of years ago Game Room City partnered on a really interesting project with artist Michael Godard. Possibly the best-selling artist today, Godard hand-painted his trademark "olive" characters and martinis on a black Rock-Ola bubbler cabinet, then painted a black pool table to match. This is just one example of the "out-of-the-box" business philosophy that has kept Game Room City at the top of the home game-room business in Southern California and beyond.
But success is not limited to clever marketing alone. GMC truly earns their fine reputation and customer loyalty by backing their sales up with good old fashioned customer service. In my chat with Becky it was clear that everyone at Game Room City goes the "extra mile" to take care of their customers.
Posted by Rock-Ola Jukeboxes at 11:32 AM No comments: 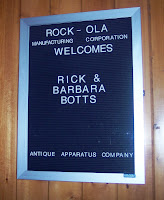 Just after the final issue of Jukebox Collector Magazine was sent out to its  readership in February, publishers Rick and Barbara Botts hit the road for a well-earned vacation. The trip eventually landed the couple in Torrance, CA, on March 10th when they came by for a surprise visit to the Rock-Ola factory.
For over 22 years, Rick published Jukebox Collector magazine, one of the largest jukebox enthusiast publications reaching thousands of subscribers per issue. Including feature stories, articles by fellow collectors, restoration and repair tips and always plenty of display and classified ads of interest to jukebox collectors world-wide, each issue of Jukebox Collector served the community of afficianados with a cornucopia of vintage jukebox images and subtly seasoned with Rick's Iowan wit. Rock-Ola is proud to have consistently run full-color back cover display ads for many years and Jukebox Collector has been a perennial supporter and friend of the Rock-Ola Manufacturing Company. 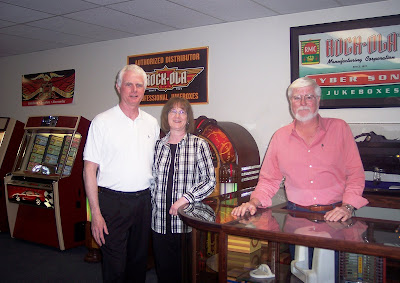 Rick & Barbara Botts with Glenn Streeter and some of the Rock-Ola collection
Rick's retirement from publishing leaves the jukebox collector world with but one collector's monthly, Always Jukin', out of California. Those with current Jukebox Collector subscriptions will have the remainder of their subscriptions filled by Always Jukin' issues, and readers will be able to follow Dan Colabuno's popular columns in that fine magazine.
For the Botts', Rock-Ola extends thanks for all the years worked together and best wishes for all the years to come!
Posted by Rock-Ola Jukeboxes at 1:34 PM No comments:

A bevy of system updates and upgrades have just been released by our development partner, Qsonix corporation. If you currently own or are planning to purchase one of the Rock-Ola Music Center Jukebox series, please take a moment to read about the new features. Release notes for Version 2.6 are available at  the Rock-Ola website:

This latest release offers a few significant changes that I think really improve on an already great system.
The Tools/System end has gotten some important changes in Version 2.6 as well.
As always, these latest system upgrades are totally free to Rock-Ola Music Center owners.

If your system is not constantly broadband connected, or if you haven't run a maintenance cycle within the last week, now is a great time to do it.

Have fun!
Posted by Rock-Ola Jukeboxes at 4:08 PM No comments: 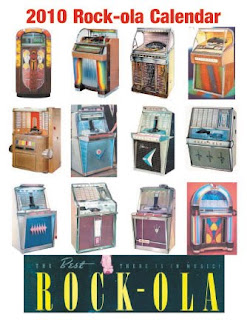 Just got a note from ALWAYS JUKIN' - a great jukebox collector publication - letting us know that the 2010 ROCK-OLA JUKEBOX CALENDARS are now available.

In addition, Always Jukin' now offers the 2010 Jukebox Guide in COLOR, available in print or on CD-ROM. Checkout their website for price and order information.

I know there are a lot if collectors out there (I hear from you all the time). This is a great chance to get the reference material you want for your vintage Rock-Ola models.

Posted by Rock-Ola Jukeboxes at 11:45 AM No comments: 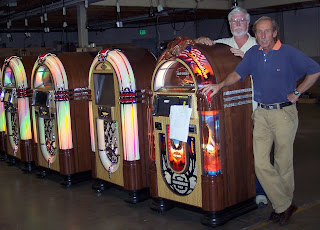