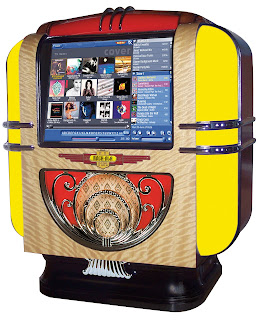 The "Q" touch screen jukebox will soon be featured on the classic game show, The Price is Right Show, due to air on the CBS network, Monday, December 14, 2009. Rock-Ola fans won't want to miss this episode. Rock-Ola Jukeboxes and the Rock-Ola factory in Torrance, California, have been featured over the years on a number of different network and cable television shows. Most famously, actor John Raztenberger made a full-length profile of the company for his Travel Network show, Made in America.

The "Q" Music Center model is a compact, retro-inspired touchscreen jukebox for the home. It features the same capacity and features of the other Rock-Ola Music Centers, with direct touch operation from crystal-clear 15" LED touch screen. So mark your calendars and tune in to the Price is Right on your local television network Monday, December 14 to find out if Drew Carey's contestant goes home with the Rock-Ola "Q"!

Posted by Rock-Ola Jukeboxes at 3:49 PM No comments:

The latest Music Center System User Manual is now available for on-line reference and download in PDF format. This manual covers the latest system updates available for the QB-PV3 series, as well as earlier models that have received the recent updates.

Current Product Service, Parts and User manuals are available on the Rock-Ola Website. Simply select the "Manuals" tab for access.
Posted by Rock-Ola Jukeboxes at 2:56 PM No comments: 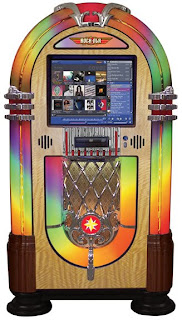 Rock-Ola Music Center enthusiasts may now enjoy a bundle of powerful system updates. All of the new QB-PV3 Nostalgic Music Centers (pictured here), as well as "Q" and "Mystic" models shipped after September 2009 include this most recent system version and build from the factory. Owners of earlier Rock-Ola Music Center jukeboxes will have gotten the upgrade automatically during the regular system maintenance process.

To confirm that you have the latest system version and build, check the "Information" tab in the toolbox. You need to have Version 2.49 (build 3.2.273.1) or later to enjoy the following features:

For a full and detailed list of recently added features, check out the Release Notes page of the Rock-Ola website.